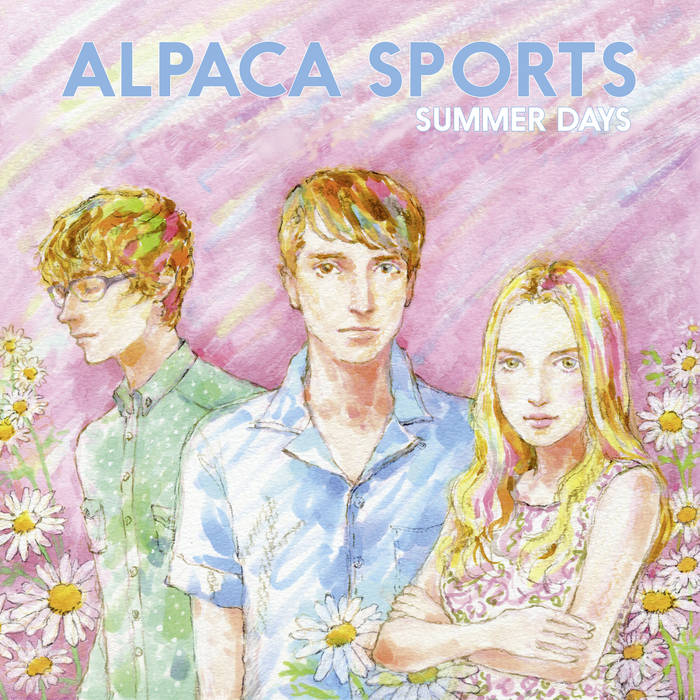 Elefant Records is proud to announce the return of international pop super group ALPACA SPORTS with their newest single, “Summer Days”, taken from the upcoming album, “From Paris With Love”.

ALPACA SPORTS were formed in late 2011 by Andreas Jonsson. Having previously been in a band called BLUEKICKS with his childhood friend Carl Jirestedt, Jonsson struck out on his own, but called on several friends to help form his musical vision. Chief among them were Jirestedt and vocalist Amanda Åkerman. Their first single, 2012's "Just For Fun", was released by the Swedish label Luxury. It was the start of a long relationship, as the label released the "She'll Come Back For Indian Summer" and "I Was Running" singles in 2012 and the "As Long As I Have You", "Telephone" and "He Doesn't Even Like You" singles in 2013. Each record had a distinctive cover created by Japanese artist Ray Kimura.

ALPACA SPORTS' profile grew with each single, enchanting fans of classic indie pop worldwide with their sweetness and songs. The band played well-received sets at the 2013 NYC Popfest, as well as several European festivals and in Japan. In 2014 they issued another single, "Just Like Johnny Marr", then followed it with the “Sealed With A Kiss” album, which included many of the singles.

After signing with Spain's Elefant Records, they returned in 2015 with the Mini-LP “When You Need Me Most”. The record featured new member Lisle Mitnik (TINY FIREFLIES), who recorded his parts in Chicago, as well as LADYBUG TRANSISTOR’s Gary Olson and Julia Rydholm who recorded in Brooklyn along with longtime drummer Hampus Öhman-Frölund. It was produced by Ian Catt (THE FIELD MICE, SAINT ETIENNE, TREMBLING BLUE STARS, SHAMPOO, THE SCHOOL...) in his London studio.

Amidst all this, Andreas moved to Paris, and was living in the shadow of the Eiffel Tower. It was this experience that sparked the inspiration for ALPACA SPORTS’ new album, “From Paris With Love”. Andreas and Lisle spent 2016 writing songs together, drawing inspiration from the city, as well as the complicated feelings that come from starting over in a new place. The two poured these feelings into creating a heartfelt set of songs to help them remember the things that get lost as time marches on.

With a plethora of new songs written, the two spent 2017 recording in earnest. Hampus was again enlisted to record drums along with Gary Olson in Brooklyn. While Lisle was recording bass, guitar, and a treasure chest full of other instruments, Andreas and Amanda flew again to Ian Catt’s London studio to record vocals, and mix everything together. The album also features illustrations by the talented artist, Ray Kimura. The result is a highly polished international record that broadens the band’s sonic scope while still maintaining their core bittersweet pop sound.

“Summer Days” is a new take on the classic ALPACA SPORTS sound and finds the group incorporating more lush arrangements inspired by bands like ABBA, SAINT ETIENNE, THE HIT PARADE, AZTEC CAMERA and BELLE AND SEBASTIAN. Director Carl Jirestedt describes the new video as a tribute to mysterious unlabeled VHS cassettes. The video takes the ALPACAS on a four minute adventure from a Gothenburg apartment all the way to the bottom of the ocean.